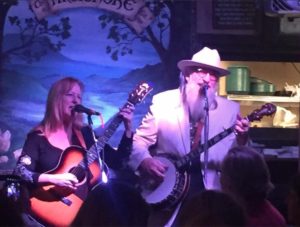 Since 2008, the acoustic, contemporary folk musicians Robin Roberts and Billie Preston have been performing steadily at a variety of venues in Wichita, Kansas and the surrounding regional area. They are always on the lookout for fun and interesting places to bring their renditions of folk, blues, and bluegrass tunes.

In January of 2010 they released their CD  “Pay-Day Motors“ with fifteen original songs written by Robin that includes the fiddle playing of Kansas Music Hall of Fame inductee Scott Piper and harmonica by Kirk Sorensen, both of Wichita. The CD has put their music in the hands of hundreds, and opened many doors for them as performing musicians.

Robin and Billie’s new CD, “LIVE from The Underground,” features new material either written since the last CD was recorded, or resurrected from decades long ago. Scott Piper joined them for this performance, as well.

Robin is a singer/songwriter, guitar and banjo player from Norwich, Kansas. You may know him from the 70s band Prairie Fire, or from the Singer/Songwriter Circle and Open Mic Night at The Artichoke Sandwich Bar, or from Grandma’s Farm on Tyler Road, or from Stage 5 at Winfield… he has been writing songs and playing for decades.

Billie Preston is a folk singer from Wichita who brings beautiful vocal harmony and finger picking guitar to the duo. Billie is a voice, guitar, and piano teacher, choral conductor, and manager for the group. She is an entertaining performer whose vocals bring depth of emotion and feeling to the wonderful lyrics of their songs.

Robin and Billie’s concert repertoire is a blend of Robin’s original compositions (a genre hybrid sometimes referred to as “folkgrass”), interspersed with new arrangements of traditional and other songs. Together they create a sound that is warm and fun, edgy and smooth… an all around good listening time.

This site uses Akismet to reduce spam. Learn how your comment data is processed.

Login to Robin Roberts & Billie Preston
Reset Password
Enter the username or e-mail you used in your profile. A password reset link will be sent to you by email.